Realtor.com®’s December data release reveals a tight housing market with few options for homeowner hopefuls, as the inventory of homes for sale has declined to its lowest point since January 2018. Properties are also selling more quickly than last year but listing price gains have so far failed to materialize alongside the inventory shortage.

The total number of homes available for sale continues to decline at an accelerating pace both nationally and locally in the nation’s largest metros. Nationally, inventory decreased 12.0 percent in year-over-year in December, a faster rate of decline compared to the 9.5 percent year-over-year drop in November and the largest year-over-year decline in almost 3 years. This amounted to a loss of 155,000 listings compared to December of last year, and inventory is now at its lowest point in almost two years. Additionally, the volume of newly listed properties has decreased by 11.2 percent since last year, further adding to a housing crunch that looks more severe than the last shortage in 2017 and shows no signs of abatement. 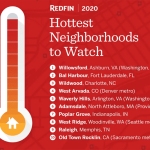